Dominique Pinto (Dom La Nena)has learned to live in motion. Born in the coastal city of Porto Alegre, she spent her childhood split between her hometown and Paris, studying cello and piano. Her songs are very diverse; she sings only three of the 11 songs on her new album in Portuguese. There are five in Spanish and one each in French and English. Pinto's debut was in 2013, when she pieced together cello-centric approach and various melodic and rhythmic elements into songs of both beauty and depth. If you don’t understand Portuguese, the joy may seem more prominent. With a translation it skews the other way: “I have no home,” she sings. “I live in the tide.”
You can listen to “Llegaré” by Dom La Nena on high Rotation coming up next week,


This is a new blog I would like to start up called, you guessed it, Gaming Den, where I will be talking about video game related material. I have a show on Thursdays at 9pm where I, TheRavanator, play video game music, and I am finishing off the Xenoblade Chronicles album. Today I'll start off with a game I am currently playing, Pokemon Alpha Sapphire for the 3DS, and a strategy I came up with for playing against the in-game trainers.

The Pokemon it involves is Chinchou. Being an water-electric type it is able to learn moves like Thunderbolt, Surf and the like. Most importantly it is able to learn Rain Dance and Thunder by TM. This means that if used in succession, Thunder will never miss unless the opponent uses Protect or Detect. One other thing about Chinchou is that one of its egg moves is Soak, this turns the target into a pure water-type. Then if one were to use Thunder it would be super-effective with same type attack bonus. To make things easier you could give Chinchou a damp rock to hold to extend the rain to 8 turns instead of 5 increasing the number of Soak, and Thunders you could do, ultimately dealing a lot crippling damage.


Tune in this Thursday at 9pm to catch some music from Pokemon Alpha Sapphire and Omega Ruby.
Posted by Anonymous at 5:00:00 PM

Bobby Capri in the Studio

Rap artist Bobby Capri will be in WNJR's studio Monday, March 3rd between 3pm and 4pm ! How exciting is that ? His most recent album, Instant Gratification, was the motivation to obtain his presence here at our radio station. Bobby Capri is talented, versatile, and genius when it comes to spitting verses over a hot beat. Don't miss the opportunity to meet such an amazing artist! This is an open campus event so bring your friends and take a selfie with this upcoming artist !
Posted by Anonymous at 3:24:00 PM

What is diversity? Diversity is the state of being diverse. In other words, it is a range of different things. African American, Caucasian, Mexican, German, and many more races mixed together is what many people generally view diversity as. To me, diversity is far more than just race. It's the difference in the way people act, talk, walk, think, and much more. It's easy to say we are all diverse, but when it comes to diversity, it also includes the people you associate with as well. Are you diverse? ...
Posted by Unknown at 12:12:00 PM

Good Evening! My name is Maia and I co-host Late Night Snack with my good friend Ty Greenwood. Every Monday at 11 p.m. on Late Night Snack, my co-host and I pick a topic to talk about for an hour. The topic may range from what's going on in the world, something that has happened to us, or even some random hot topic we found from Twitter. Tune in tonight to hear us talk about the Oscars and about who shouldn't have won, who should have went home with an award, and who was left out of Oscar nominations. Check my post again next Monday to see what the topic will be for Late Night Snack next week. Enjoy your day! (:

This week I wanted to talk about a band called Love Like Hate! Formed in 2009, Heather Cheketri and Sonja Ter Horst combine punk electric guitar and melodic piano to create what they call "Dark pop".

I highly encourage you to check out their newly released album "Unnoticed", as well as their website, which is where this picture is taken from.  My favorite song is Electric Ships! What's yours?
Posted by Anonymous at 2:00:00 PM

Check out new album by John Petrucelli on WNJR. Petrucelli is a  saxophonist  and composer. He first heard about jazz in Trenton, where at age nine his dad took him to jam sessions at the Candlelight and Joe’s Mill Hill, where he saw saxophonist Richie Cole. Petrucelli first dreamed of becoming a lawyer but later found out that he was spending more time playing on saxophone than preparing for his LSATs.  Petrucelli graduated from University of Virginia, he did his MA at Rutgers, and is a current PhD candidate in jazz studies at University of Pittsburgh.
He played with guitarist Peter Park and drummer Gusten Rudolph.
Park and Rudolph reunite with Petrucelli on his new album “The Way,”

Tune in on WNJR 91.7 FM and listen to John Petrucelli's new album "The Way"
Our station's favorite song "Moment Of Grace" is on high rotation this week. 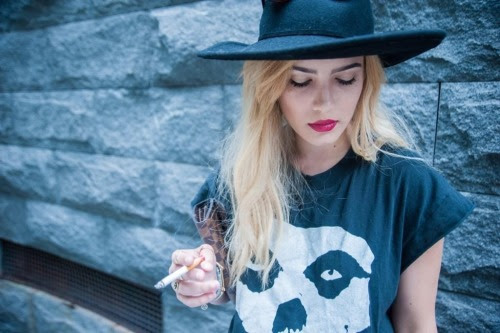 Check out up and coming artist, Halsey. She's going on tour with Imagine Dragons starting March 11th all the way till August 1st. Trust me, she's someone to keep your eye on! She has great songs and a fresh new style. Check her tour schedule and some other pretty cool stuff on her website.
Posted by Anonymous at 1:59:00 PM

Hey there! This week I wanted to blog about a song called "Sound and Silence" by a band called Dead Poet Society.  It definitely has an alternative rock feel, but it's also very catchy.  I've added it to WNJR's high rotation system so tune in to catch it on air, or to listen to is right now and visit https://www.youtube.com/watch?v=L2eXFoEuGJo to check out the music video!

Dead Poet Society classifies themselves as a groove rock band, originating from Boston Massachusetts.  The band includes lead vocalist/guitarist Jack Underkofler, guitarist Jack Collins, bassist Nick Taylor, and drummer Will Goodroad.  Check out deadpoetsociety.bigcartel.com for all of your merchandising needs!

Their new album "Weapons" includes 7 tracks, Sound and Silence being the first song on the album.  I highly recommend checking out the other 6 tracks as well.  You can investigate them further at their facebook page https://www.facebook.com/deadpoetsocietyband where the picture above is taken from.  Rock on!