Her birthday is tomorrow so I thought it would be best to show some love to one very interesting and little-known artist: 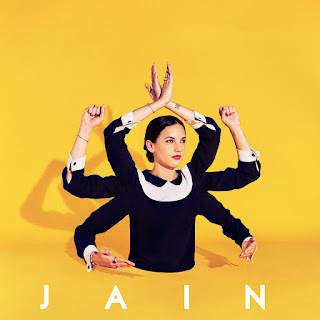 Jain, Jeanne Galice, was born in and spent the first nine years of her life in Toulouse, France. However, as a child Jain also lived in India and the Republic of the Congo because her father's job, which moved them around. It was in Dubai that Jain's interest in Percussion became a love, and it was in the Congo where she met a producer who taught her how to program and how to record herself. Using this new knowledge, Jain began writing songs and making music. While her music is put in the genre of pop, it is definitely unique, she has been inspired by the different types of music she heard around her throughout her childhood, namely, Arabic percussion, African rhythms, electro, reggae, soul and hip hop. Her bright and inspiring lyrics just bring her songs together and make you want to listen to them over and over again. Her album, Zanaka, which means "childhood" in Malagasy (her mother's native tongue) is a diary that documents her life from ages 16-23 years old, and is worth listening to.
Posted by Zoe Pienkoski at 4:32:00 PM